The only reason I can imagine that you don’t know about The Asylum’s latest  opus, Sharknado, would be that you didn’t touch any social media platforms in the past week. If SyFy (I still hate that name switch) had put this much effort into promoting series like Stargate Universe, the show’s ratings would have likely been more than enough to keep it going….not that I’m sore about that or anything. Still, I think the ramped up ridiculous-ness of this “series” of mega-monster films is definitely to thank for its popularity and presence in our collective social consciousness. It’s become not unlike a bad joke that you just keep telling hoping that it will somehow get funny. Mostly, that doesn’t work. With last night’s premiere of Sharknado it absolutely did. 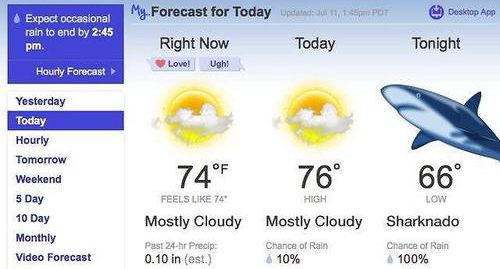