Because THIS is how you get Terminators.

Humanoid robot runs through the park by itself

For the past decade my HTPC (Home Theater PC) has been running XBMC (Xbox Media Center). I’ve tried other software occasionally to see if I could do better than XBMC, but in the end I always came back to XBMC. At one point I tried Plex, and while it was decent, I felt it still couldn’t hold a candle to XBMC. Over the years, Plex has made a lot of updates, and now I think it’s time to crown a new HTPC King.

Plex started out back in 2008 as a fork of XBMC.  At first it was pretty much a clone, but it slowly stated to change.  Where XBMC is pretty much its own Client and Server, Plex broke itself into 2 pieces so you could have your media server sitting somewhere, and a client application installed anywhere to access your media.  So with XBMC I need to have a separate database and a separate instance of XBMC running wherever I want to use it.  This can lead to completely different items available in different places unless you put a lot of work into getting it all right.  With Plex I have my media on one server, and all of my various clients connect to one database to get to my media.  If I happen to have a second server with media in another location, that’s completely fine.  The Plex client of your choice will easily be able to access your content on as many servers as you have. 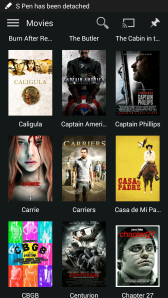 The main reason Plex has taken off isn’t just because of the client/server architecture.  Recently Plex has made it really easy for users to share their server content amongst each other.  So you can have a Plex server running in your house, and I could have a Plex server in my house, and we can have our Plex clients access each other servers and stream whatever you feel like sharing.

Another great thing about Plex is the amount of devices you can install it the client on.  If you want to, you can just use a PC for the client, but there are so many other options.  LG and Samsung Smart TV’s, and Blu-Ray players have Plex Apps that you can install. You can also connect to Plex from a Roku, Google TV, Chromecast, and Apple TV.  Aside from all of those devices, you can install a Plex client on just about any smart phone platform, and you can connect to your Plex server at home from anywhere you have an internet connection!  The server keeps track of where you left off with whatever you were watching, so if you were in the middle of an episode on your phone and had to stop, you can pick back up again at home right where you left off.  It also keeps track of what your next episode is in a series, so you don’t have to remember.

You can install the Plex server on a ton of devices as well.  Aside from any PC with the OS of your choice, you can install it as a plug-in on different hardware servers like Synology, QNAP, and Drobo devices.  Setting up a server will vary in difficulty depending on the device you are trying to install it on.  On a PC, it’s pretty quick to get running without an issue.  I installed it as a plug-in on a FreeNAS server recently and that took a while to get running properly due to my lack of knowledge on how FreeNAS handles plug-ins.  Thankfully there is a pretty big support community out there for Plex to help you get it up and running and just about anything you can think of.

While the majority of Plex is completely free, they do have small charges for certain apps or features.  The Plex PC, and TV clients are completely free, but mobile clients are $5 unless you’re a Plex Pass subscriber.  Plex Pass is a subscription service that gives you a few extra options for $4 a month.    Without Plex Pass I can stream content to my phone or tablet when I’m out and about through my cell service, but what if I’m stuck in the subway without service?  One Plex Pass feature is Plex Sync which allows you to sync whatever you want to your mobile device ahead of time, so you can watch it later when you don’t have a connection.  You can also sync to cloud storage like dropbox.  You can set sync to automatically grab the next episode of a series once you have finished 1, so you always have a certain amount of episodes with you at all times.   Plex Pass is also designed to give users early access to newest features.  Streaming to Chromecast was an option for Plex Pass subscriber’s months before it became free to everyone else.  Perhaps the sync feature will eventually be free as well.

One other thing you can do is share between users.  I have played around with is feature a little and it’s pretty nice.  Basically you can agree to let a Plex user, connect to your Plex library and they can do the same to you.  So from your Plex device, you can stream a movie, TV show, or anime from another friend’s server anytime and anywhere.  You can even sync media to your device if your friend will allow you to. Streaming doesn’t take up a lot of computing power, but synching can.   Plex streaming to a device might take up 10-20% of my PC power, but when Plex syncs it transcodes (converts) the media to your device, and use all your available system resources at the time.  On a fast machine this won’t take long on a per episode basis.    I can fully sync 5, 30 minute episodes of a series in 5-10 minutes and have them on my phone ready to view.

I have experienced a few bugs with Plex, but nothing major yet.  Occasionally my Plex Home Theater app I have installed on my server will lock up if my phone starts syncing to the server because I finished the episode and it’s going to transmit the next one.  Also there are times when Plex won’t transcode subtitles for some reason.  It seems to get it right most of the time, but there are occasions when a random episode would get to me without the appropriate subs.   I need to explore this issue more because it could be something that I’ve done wrong on my end with the media I’m transcoding.

There are several good guides out there on how to get Plex up and running.  I recommend checking out Assassin’s HTPC Blog.  He has very detailed step by step instructions on how to setup Plex on your server, and on the client end.  For the most part setting up Plex is pretty simple.  It may get a little complicated when you try to make it talk to other Plex services, because you may need to open up ports on your home router/firewall and do port forwarding.  The installer has a guide that will explain how to do this in detail, so don’t worry. Even if you do get stuck at that point, there is a pretty big community at Plex.TV that can help.

Let me start off by saying that I have, unfortunately, never been to SDCC or Nerd HQ. I absolutely love going to conventions (mostly local – NYCC, Philly Comic Con..etc.), but END_OF_DOCUMENT_TOKEN_TO_BE_REPLACED

What did my girlfriend want for her birthday?  A Sega Genesis.  I’m so happy.  Unfortunately, my Generation 1 system disappeared a long time ago.  It never stopped working but I think I loaned it away and never got it back.  Therefore, I Ebay’d a new one (Generation 1 of course).

I knew that I saved some of my cartridges for a reason including the epic Phantasy Star series (my favorites).  However, I had two problems.

1) The beloved Phantasy Star 1 was not a Genesis game.  It was made from the precursor, Sega Master System (SMS).

Best game ever made.

2) Phantasy Star 1 was released in the US in 1988.  I bought it immediately.  Therefore, in this little plastic container was a 25 year-old battery!  I just hoped it wasn’t leaking all over the printed circuit board (PCB) by this time.
END_OF_DOCUMENT_TOKEN_TO_BE_REPLACED

A few weeks ago Microsoft finally announced the successor to the Xbox 360.  The new console, the Xbox One, is slated for release later this year.  I’ve been a diehard Xbox fan since the original Xbox for a few reasons including the size of their controllers over Sony’s Dual Shock controllers.  That all being said, MS might be pushing me towards using Sony’s small controllers with their 24 hour connectivity checks.