One of Marvel NOW’s most anticipated books releases this week, Avengers #1 by Jonathan Hickman and Jerome Opena.  I must say that I’m super excited for this book.  Hickman quickly made Fantastic Four one of my favorite books, so it’ll be great to see what he can do with Earth’s Mightiest Heroes.  From DC we see the Rotworld story continue with both Animal Man and Swamp Thing releasing their 15th issues.  Now for some covers.

END_OF_DOCUMENT_TOKEN_TO_BE_REPLACED

Here are my favorite covers from the current week of comics.

Not everyone likes him, but I’m kind of a sucker for Alan Davis art.  I especially like the way that he draws Thor, and this cover is another great rendition.

I love David Aja’s work, and his covers during his run on Immortal Iron Fist remain some of my favorite.  I was pumped to learn that he would be working with Matt Fraction again, this time on Hawkeye.  As this cover shows, he doesn’t disappoint.

It’s Skottie Young, and for me personally that’s really all that’s necessary for this cover to be on the list.  It’s a variant cover celebrating Spidey’s 50th Anniversary, and it’s fantastic.

Is it just me, or does comic-book artist Zeb Wells (Spider-Man, Daredevil: Battlin’ Jack Murdock, Fantastic Four/Iron Man: Big In Japan) look quite a bit like basement dwelling über-genius Lazlo Hollyfeld from the movie “Real Genius”? 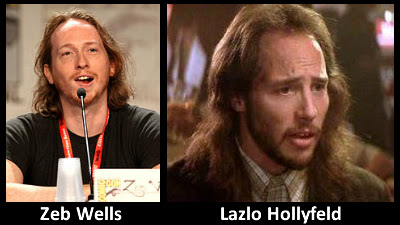