Unless you live under a rock, or ya know…had other responsibilities, you’ve probably heard and/or seen the new Avengers: Infinity War trailer that dropped today.

As if there were any doubt, it looks amazing. For all it’s wonderful inclusions, I’d like to know what you all think!

An even better question (please leave your answer in the comments below) is, what character would you like to see introduced in this movie that has not yet been in a MCU film?

My vote? Well, I’m going to cheat here because it’s less of a singular character and more of a group. How much would you all freak out if, say, in the post credits sequence, a certain ship materializes out of a certain negative zone with a certain family of Four…. OR…better yet, a slow zoom to Thor, laying unconscious on the ground, as we close in on his face, what looks like a rocky hand pinches his nose and leans in over his face, Thor comes to, flailing then as lucidity comes and his vision starts to correct, he says softly, “Korg? What has happened to you?” to which our ORANGE rocky friend replies, “Korg? That’s the last time I try mouth-ta-mouth resuscitation with a guy that calls himself a thunder god…” The camera zooms back out as we see the rest of the FANTASTIC FOUR come into view!!!

In case you’re not savvy to the current Marvel Now! stories, there’s a mini-series going on now that, although a pretty fun read, is pretty obviously being made solely to explain who the character was at the end of Avengers (Thanos,  who is the main antagonist of the Infinity series), and how he ties into the Guardians of the Galaxy movie which comes out next year (READ: Filling in all the folks on what GotG is and why they should be excited about it), of which Thanos is rumored to be the main villain in.

Infinity is more or less a “world ending” event tie-ing in the stories of the Avengers, New Avengers, Uncanny Avengers, Iron Man, and Guardians of the Galaxy from the past year.  The effects of the Infinity storyline will lead in to a comic event titled Inhumanity detailing the after-effects of the famous Terrigen Mists covering the world and activating dormant “Inhuman” genes in individuals around the world. So, expect a few new heroes/villains to pop up over the next few months!

Well, issue number one is out, and it has perhaps the best Skottie Young cover yet, and I’ll be honest, the only reason I wrote this post is because I saw it and got so excited I felt the compulsion to share! 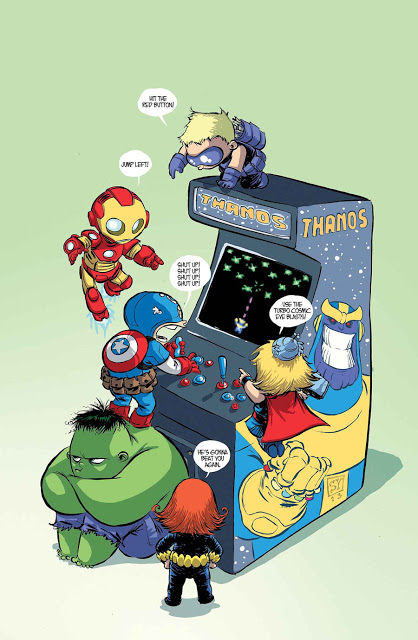 So, if any of you find the actual art, or a decent sized print of this, you either buy it for me and I’ll love you forever, or at least email me and point me in the right direction, because this is amazing!! 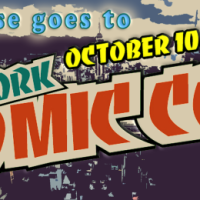