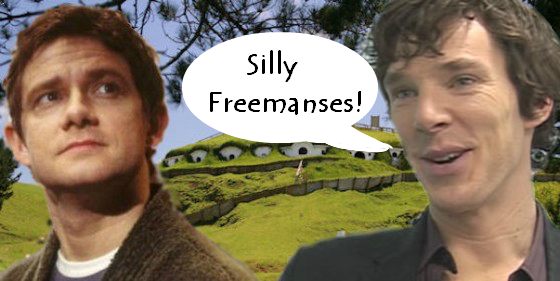 Recently, MTV news caught up with Benedict Cumberbatch and asked him about his work on Peter Jackson’s upcoming film adaptation of “The Hobbit”. Among his adulation of working with Jackson and a brief bit about his role(s) in the movie he told of a funny incident with his friend and “Sherlock” co-star, Martin Freeman.

“It was great. I got to hang out with him, and I kept a straight face for a bit and then I started giggling because I know Martin, I don’t know Bilbo,” said Cumberbatch

Aside from his giggle fits, he did have a bit of admiration for Freeman, saying, “For Martin to be sitting there playing Bilbo is amazing. He’s going to be amazing, he’s going to be fantastic in this film.”

All laughs aside, I’m incredibly excited for this movie. I can’t wait to see how they use him as “Smaug” seeing as he not only did the voice, but mo-capped the performance.

Here’s a the actual “interview” clip: