Fans everywhere anxiously watched the very last episode of the hit show How I Met Your Mother last night.

There were a plethora of theories and speculations regarding how the writers would send off this show. My theory was that the mother had been dead, as older Ted (aka Bob Saget) was telling the story to his kids about how he met their mother. It seemed make the most sense why he was telling them this story, and it was obvious her death wasn’t recent because the kids seemed content with it, rather than being emotional and teary eyed. I wasn’t alone on this theory. Many fans had thought this too, and it was a mix range of emotions whether or not we were all okay with this. It was very upsetting if they were going to end it that way, because Ted’s life seemed like a string of failed relationships and bad luck. The guy just wanted true love! However, for this entire last season, I had accepted that fate so that I wouldn’t be upset or in shock if that did come to pass.

I will say right away, that I wasn’t a fan of the episode, itself. There was a lot of confusion for me as I was watching the episode. I felt like I was watching an evil timeline version of How I Met Your Mother. Of course, there were very sad episodes through the run of this show, but this one felt quick and to the point, unlike other episodes. I looked up at the clock a couple of times, and noticed there were 20 minutes left…. 20 minutes, I thought. How will they remedy all of this tragedy? Then 10 minutes, then 5.. I wasn’t happy, but for some reason the final minute of the episode made it okay for me. As credits rolled, I sat on my couch, holding my glass of wine with a beyond puzzled look on my face. My main problem was that I didn’t know if I had liked it or not. In theory, I feel like I should have been furious with the way things ended. After all of this time, he goes back to Robin? It felt like such a cop out. Then I thought back to the entire series, and it actually clicked with me. A majority (I would say close to 90%) of these episodes revolved around Robin. Whether or not she was with Ted. Heck, even this last season was all about Robin’s wedding.

For those of you who don’t watch the show & are just curious as to how it ended (which, I’m sure you can find tons of people bitching about it all over the internet), the ‘mother’ ends up having some sort of terminal illness (which they never got into). Within those 6 years between her death and future Ted talking to his kids, Ted and Robin have rekindled their friendship again. They refer to her as Aunt Robin, and they make comments about her coming over for dinner quite often. The kids figure out that this is his elaborate way of asking his kids’ permission to ask out their Aunt Robin on a date, and they are excited about the idea of him dating her. That part made me a bit uncomfortable with the kids pushing her onto him, I understand they want him to be happy, but they don’t find it weird that he spent all of that time talking about how much he was in love with her for years & years? It would make me wonder if he really truly loved my mother, if I were his kid. Anyways, his way of asking her out, in true Ted Mosby fashion, was to yell up at her window, like he had in the very beginning of HIMYM. It was almost the exact scene, with her walking in her apartment with her group of dogs, and Ted waiting outside with the blue french horn that he stole for her. I admit, I liked how it wrapped around back to the beginning again.

Things that bothered me about this episode:

The entire season was about their wedding, their love, their vows. It was heartbreaking for them to just casually say, “Oh, we got divorced.” It is very them to keep it on the DL, but we didn’t even get to see them falling a part to prepare ourselves for this. They just decided they weren’t happy instead of really working together. 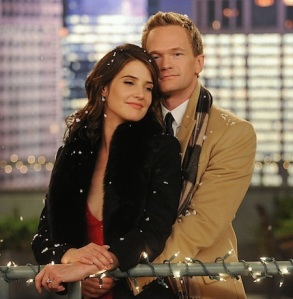 I understand Robin is probably going through pain and wants to distance herself, especially from her ex husband, but why her entire group of friends? They spent an entire episode of the story where Robin’s ex BFF from Canada had a baby and her friend basically “dumped” her, and Robin felt scared that Lily would do the same to her. As far as I can remember, it seemed like she would be there for her best friend through it all. All of the sudden because her friends are getting married and having kids she runs away? I absolutely hated seeing them barely knowing Robin anymore. Perhaps it was because she realized she should have been with Ted and it pained her to see him happily married with children? Although, that was something she had stated from the beginning that she was not interested in. Even when she had feelings for Ted when they weren’t together (when he was with Victoria, for example), Robin still stuck around with her friends. It just seems very out of place for her to do that. 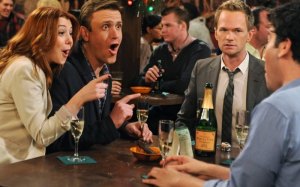 Okay, this one I have mixed emotions on too. It was really sweet seeing Barney holding his baby girl, and it seemed fitting that he would eventually knock up one of his many, many conquests, but it seemed so… weird. He all of the sudden completely changed his ways, which was also nice, but it was heart breaking that Robin wasn’t able to have kids, and all of the sudden he knocks up some random (which, we never even see her or know her name). Not that Robin wanted kids or anything, but something about it was very heartbreaking.

It seemed like they built her up only to brush her under the rug.

I was going to finish this article & defend its ending, but I was just shown by a friend an ‘alternate ending’ of HIMYM.. I believe it was fan made. I completely take back accepting the way the show ended and now I want this. So bad. Honestly, I thought if they did it this way, it would be so cheesy and not much of an ending, but this is perfect. HIMYM fandom, can we all come to an agreement that this is the REAL ending? The one we deserve? CBS, you can even re-air the episode with this ending next monday and we’ll all pretend the other one didn’t exist!

Although, I still wish that it was Bob Saget saying it instead of Ted, but… I guess I can’t have my cake & eat it too.

In the end, I quite enjoyed the run of How I Met Your Mother. So many fantastic episodes that have made me laugh out loud, cry, and drop my jaw. Cheers to 9 years!

3 thoughts on “How I Felt About the Finale”