When a movie crosses one’s path with Jet Li in a starring role, it’s difficult to imagine anything but a cool action kung fu movie.  Don’t get me wrong.  While this movie is packed with demon-fighting action, it is really a love story.

About a week after seeing this movie, I was at a performance by the Shanghai Circus.  The performers conducted amazing skits.  Then they announced a partnered dance routine called “The Sorcerer and the White Snake”.  It was a love dance between a young man and a demon.  That’s when I realized that the movie I saw was a rendition of an older tale.

The Legend of the White Snake or Madam White Snake was originally a Chinese oral legend about a herbalist and snake spirit that end up sharing pills of immortality.   Well, immortality cut in half is still a really long time.  A tortoise spirit becomes jealous that he wasn’t the one to have immortality.

One day, the white snake notices a green snake  about to be killed by a beggar so she transforms into a human to buy the green snake instead.  The green snake then regards her as an sister and helps white snake reconnect with her lost love, the herbalist whose fate is intertwined with her own.  They instantly fall in love and marry.

However, the tortoise was still angry and transforms into a monk.  He tricks the white snake to reveal her true form causing the herbalist to die of shock.  Fortunately the two snake sisters steal a magic herb and revive him.   Eventually, they defeat the tortoise.

A bunch of other things happen.  It’s an oral story so there are many variations.  For instance, in another version a goodly monk tries to keep the herbalist from making a terrible mistake by falling in love with the white snake demon.  Etc.

This movie, The Sorcerer and the White Snake (2011), is clearly a compilation of the various versions of the story.  It starts off with the heroic monk, Abbott Fahai (played by Jet Li) and his disciple, Neng Ren (actor Wen Zhang), battling an ice demon.  Essentially, they are early Chinese Ghost Busters.  After catching the demon, they bring it out of the spirit realm for containment. 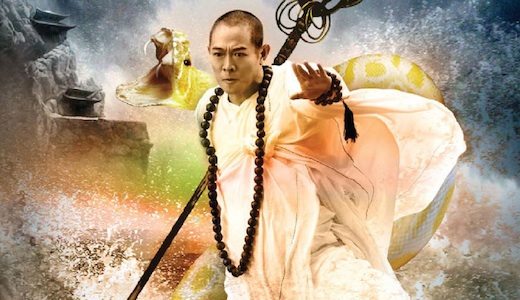 The monk, Fahai, being awesome.

We are then taken to a beautiful forest and introduced to the lovely white snake Susu (actress Huang Shengyi) and green snake Qingqing (actress Charlene Choi).

These two playful demons simply enjoy their time in the human-world forest.  Susu become fascinated by a group of friends searching for herbs in the forest.  Qingqing becomes a little jealous and she mischievously scares one of them, Xu Xian (actor Raymond Lam), off a cliff into the water.  Susu transforms her body into a normal human form and saves him from drowning with underwater CPR.  From here, Xu Xian and Susu have an instant connection and fall in love.

The monk learns what is going on and he attempts to explain to the white snake that such a relationship can never work out.  She refuses to believe the mean monk, who is clearly prejudice against demons.  To be fair, most demons in this movie are quite evil.  The lovers must acknowledge their differences and limitations, the monk learns to let go of his biases, and Buddha teaches us all a lesson.

This was a fun movie.  There are many nods to the original versions of the story such as a comically slow talking tortoise (although he isn’t evil).  The fight scenes are good.  The computer animation is simple and slightly cartoony (sort of like Pans Labyrinth) but appropriate.  To me, the latter quarter of the movie drags a bit with an extended battle scene.  It has a typical Buddhist ending which generally means not a particularly happy ending but not a totally sad one either.

2 thoughts on “The Sorcerer and the White Snake”