One of the highlights for me at NYCC 2012 was the panel discussion and preview trailers of the animated rendition of this truly great Frank Miller story, The Dark Knight Returns Part 2.  The panel was made up of legendary Warner Brothers, DC producer Bruce Timm and the talented voice director Andrea Romano,  moderated by Gary Miereanu.

Before getting to the main event we were first introduced to a trailer of the next Lego Batman movie, “Lego Batman: The Movie: DC Super Heroes Unite” (YouTube trailer not yet released).  I played the Lego Batman game.  Honestly, I wasn’t impressed with the original and it was not a bias against the Lego games; I enjoyed Lego Star Wars much more.  Lego Batman seemed too restrictive in its movement through Gotham.  Still, there is something lovable about all things Lego and I definitely support this one.  Plus the trailer was funny and the choice to add voices into the animated bricks is a good one.  Watch for it.

Back to the real stuff.  I think that The Dark Knight Returns is the greatest American graphic novel ever written so my expectations were high for the animated features.  To make matters worse, I have followed and collected the Timm-verse animations since day 1.  Having said that, I wasn’t completely happy with the release of Part 1.  However, it’s a hell of an undertaking and I think they did a good (if not great) job.  Mostly, I felt that the tone was off in a few scenes and with a few characters.  Again, it may be my bias, having loved the books, however, I always felt that Jim Gordon had become a deeply bitter man drained by the city he (and his silent partner) gave so much for.  In the animated feature, I felt he was portrayed too warmly and patient… more of a kindly old grandpa.  It seems that Part 2 is consistent.  At this point, it would have to be anyway.  Regardless, I greatly enjoyed Part 1 and I plan to do the same next time.

Part 2’s action seems intense and does the graphic novel proud.  The audience was treated to a number of clips from the upcoming feature.  The first was Batman taking apart Police Commissioner Yindel’s force on the rooftop.  Loved it.  The panelists discussed the deep pounding music being modeled after the 80’s style from the talented minds of Wendy Carlos and John Carpenter in order to capture the intensity of the scenes and also to pay homage to the era the story takes place in.  It’s not actually clear to me that the animated movies take place in the 80’s but they do have a feeling of the time period.  Of course, Superman will get his typical orchestra when he appears.  Oh yeah… and for anyone worried about spoilers, read the damn book already. 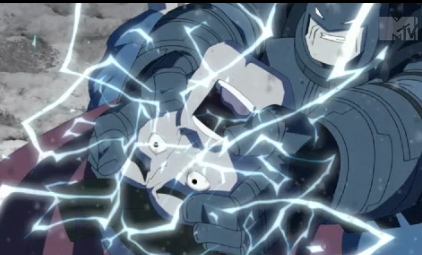 from the graphic novel

The next clip shown was the Braveheart-esque scene of Batman riding a horse and addressing The Sons of Batman (gang members turned copy-cat vigilantes) in an inspirational speech.  Again, here is one of those areas where I thought the tone was off.  Peter Weller (voice of Batman) really didn’t seem fully invested.  Don’t get me wrong.  I think Peter Weller is a brilliant Batman choice.  Still, this scene was lacking energy.  Perhaps seeing the scene in its entirety will change my mind.

The final clip was one of my favorite parts of the book: Joker goes on a talk show and gasses the entire audience.  To be fair, he warned them.  Michael Emerson does the voice of the Joker which again is a good choice.  Personally, I would have liked to see a slightly more flamboyant portrayal, much like any number of aged Broadway performers still wearing their extra long scarfs in late June and eyeballing the cabana boy.  Let’s face it, The Joker is a pretty flamboyant character.  Simply replace the scarf with lipstick and the cabana boy with a few hundred corpses.  Anyway, the scene was great. 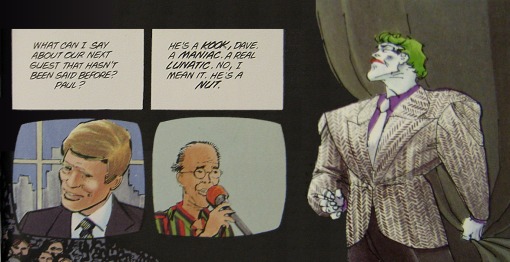 I’m ready for my closeup.

As a special treat, Conan O’Brian voices the talk show host and we are promised a great Joker-gas laugh from him.  Someone asked why the Joker isn’t smoking the cigarette in this scene that he has in the graphic novel.  Bruce Timm said, “Tobacco in cartoons automatically gets an ‘R’ rating.  Swastikas on naked breasts are OK.” 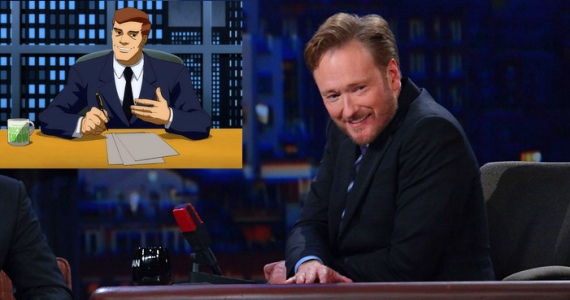 Andrea Romano said that 30 actors voiced this movie with about 130 voices.  Michael Emerson said Joker was the hardest role he ever played.  As I said before, it’s a hell of an undertaking and I recommend watching The Dark Knight Returns Part 1; Part 2 will be at least as good I think.

The panel finished up with some Q and A’s.  Here is the quick and dirty informational:

The Dark Knight Returns Part 2 is due out late January or early February.  Here is the trailer: