Now, thus far if you’ve followed the site, you’ll not guess me to be the video game guy, but having managed a certain major video game retail outlet for about 7 years, I can assure you, it’s a definite hobby. However, I’ve never really gotten myself hooked on any MMO’s. I’ve tried WoW, Star Wars, City of Heroes, D&D….they were all good, they just weren’t for me. I was contacted by Snail Games to come check out their new entry into the fold at NYCC, Age of Wushu, and I think I finally found my fix. 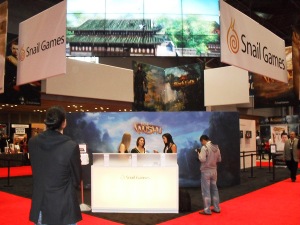 Upon arrival to their booth, I was greeted with elegant imagery that could have come straight out of any of Hong Kong’s greatest Kung Fu epics. Sprawling mountainous vistas, beautiful gardens, majestic pagodas…and high flying warriors dressed in elegant garb and wielding the magnificent, deadly weaponry of Chinese Martial Arts. Having a long-standing love of Kung Fu movies and martial arts in general, I knew I was in for a treat.

I had gotten there early, so the booth hadn’t been fully set up, but it was time for our scheduled interview/demo. Thankfully, they hadn’t set up their meeting room just yet, so I had plenty of time to get some hands on with the game itself. 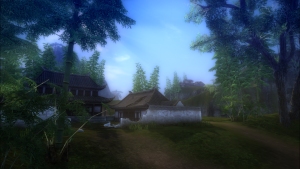 The environments are simply beautiful.

The first thing I noticed upon playing Age of Wushu was how incredibly gorgeous the environment was. Having at least dipped my toes into most of the existing domestically released mmorpg’s, I was used to seeing decent graphics, but with a lower attention to detail to, I assume, be less taxing on the servers. But this…the trees, grass, buildings. The lighting and the way the breeze blew things around. It was definitely a plate of ocular sugar. Not to mention the detail of the character design. Nothing looked like it needed to be overly large to show any intricacies. The fluidity and animation of movement was not to be denied either.

Once I started to get into actually moving around and through the environment, instead of just staring at it, I noticed that the controls seems much more responsive and your character moved at a pace that felt comfortable (in WoW, I always felt like my animation was running faster than I my actual movement, which was one of the frustrations I had with the game). Then, as I am apt to do, I just started experimenting and hitting buttons. 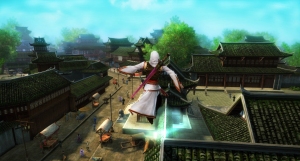 Among them, of course, the space bar. So I happily ran around and jumped, when I suddenly realized, you can double jump! I was like, “Oh cool, just like a console game.”, when my guide said something akin to, “Oh you like that? Do this…” and he taught me how to fly.

Then I learned not only to swim, but to run on top of the water and then straight up a wall that could rival the Great Wall of Chi….oh wait…maybe that *was* a real world reference…

Next we got to do some dueling. The battle mechanic is pretty much the same as most MMOs. Although, yes, this did kind of turn me off (I’m more of a diablo-esque hack-n-slasher), it was different enough that it was interesting. There are three types of attacks that act in a sort of “Rock, Paper, Scissors” format. There’s your standard attack, parry, and strong attack. Standard can be parried, but strong can break the parry, yet standard is fast enough to cancel out the strong. Pretty simple, yes, but it is much more fun than it sounds.

There is no real “leveling” in this game per se, instead you start under a certain “discipline” or “school”. For example, Wing Chun or Shaolin. Each discipline has its own rules which from what I’ve gathered, pretty well coördinate with their relative “real world” counterparts. You cannot be a female character and join the Shaolin monks. You cannot be a drunken boxer if you’re Shaolin. *(see below) You don’t lose anything you’ve learned while there and can pick up new skills anywhere your path leads you. An interesting note that describes a certain mechanic involved in growing your character; as I noted, you cannot join the Shaolin as a female character, but a female character CAN break into a school and steal the manuscripts to learn certain aspects of their art. This goes with just about any of the styles.

Another amazing part of the game is that it doesn’t really end for your character when you sign off. Once signed out, your character goes into a sort of “NPC mode”. In this respect, if you’re a beggar, your character will simply sit on the streets panhandling. 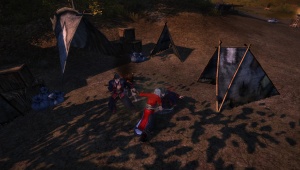 If you’re a member of a school, you will become a janitor or patrolman to clean or defend your dojo. However, and this I found particularly cool, if your “NPC” is beset upon by evil characters, you can be drugged and kidnapped then sold off to the seedy underworld for money and…reasons… BUT…if a friend or a good character sees this happening, he or she can defend and/or rescue you.

The crafting of weapons in this game is pretty awesome too. It’s definitely “community minded”. By that I mean, if you’re a blacksmith and you make a blade, you then have to take it to a woodworker to get a hilt made, then to a chef to sharpen it best, then perhaps a poison maker to tinge the blade, or an artisan who can create adornments. You can also barter for these things. You can create multiple blades and trade them for other parts. You can then either, of course, use it yourself, or sell it off.

The best thing I could say at this point is simply do yourself a favor and give it a try. Whether you’re a veteran to the genre or completely new to it. I think you’ll be pleasantly surprised.
That all said, here’s both an interview I had with one of the members of Snail Games’ team, Tyler Rawlins, and the game’s trailer. Enjoy!

*I just received an email from Snail Games letting me know that unfortunately this feature has been removed from the new build. Here’s the excerpt:

….(it was) mentioned that the players were free to quit the schools that they had joined in-game and to customize their skills and character freely through leaving schools. This was an old feature implemented in a version that we had been working on and demoing for the past months leading up to NYCC. In reality the developers had made a decision to make it so once a player chooses a school, they are NOT ALLOWED to quit that school. This is to keep them from starting over far too late in the gaming process with another school and many other technical reasons. If a player feels that the school they are with does not fit to their style, they would need to delete and start over at this time. Thankfully we have the Beta’s in the coming months to help players figure out which school suits them as well as other in-game menus that will break down the basic starting skills you can learn within a school. Players are still not required to join a school until they decide when they want to join.

So, unfortunately this feature has changed. I could see it being abused anyway, so it kind of makes sense.
On a plus note, once the Betas go live, we may be receiving a few keys, and who knows, we just may decide to hold a little contest to give one out to a lucky reader!! Stay tuned!