Yesterday the Don Mattrick, Microsoft’s President of Interactive Entertainment Business, released a statement about how much consumer feedback matters to them.    In the statement Microsoft pulled a complete 180 on all of their previously announced draconian policies.     They will no longer have a 24 hour online connectivity, and games can be traded, sold, and rented as they have been for the past 30 years.  As soon as I read the announcement, I pre-ordered my Day One Edition of the Xbox One console from Amazon.  Now the bigger question I have to face is what I do about my PS4 pre-order.

For me, Sony has shown right off the bat that they are more in the corner of gamers by making all of their announcements about games, while Microsoft has been about having the “One” box to do everything for you.  Sony has the right messaging, and I really feel like they have my back . . . but do I have theirs?  The games they have shown at E3 were ok, but I wasn’t wowed by any of the exclusives.    This generation I’m not sure if I need both the One, and the PS4, but I’m not entirely sure I trust Microsoft to have my best interests in mind. 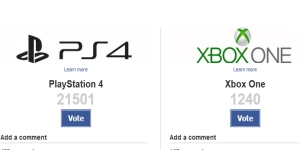 Amazon poll shows people favored the PS4 94% over the Xbox One, before Amazon pulled the poll early.

After both consoles were announced and available for pre-order,  the PS4 was outselling the One by about 4 to 1.  Somehow the sales ratio’s equaled out to the console names.   Almost 2 weeks after Microsoft’s DRM announcement, MS retracted the statement, and now the Xbox One is the #1 selling game product on Amazon.   It makes me wonder if this move was actually due to Microsoft listening to what people had to say, or their bottom line being hurt.  Was the decision made because we asked, or because of scared corporate executives?

You might be asking yourself why I think it matters how they have come to the decision.   If it was because they were actually listening, that’s great.  I hope they keep listening to what we are interested in. If it’s because they fear the bottom line, then that makes me wonder what other weird decisions they may make in the future after I’ve already purchased the console.  What type of innovation can I expect from Microsoft over the lifespan of the One?  Since the Xbox 360 launched they tried a lot of stuff.  Some of it worked out like the Kinect, and Netflix streaming.  Some of it didn’t like HD-DVD, and Zune, but at least they were willing to try something interesting that some people wanted.  With the anti-consumer policies that Microsoft just tried to put forward, I have to think that they were completely out of touch with what their audience wanted.

One bad thing that comes with the policy rollback is that the Xbox One was originally going to allow you to share your games library with up to 10 people, via the internet.  You would have been able to share a game that you have with a family member that lives in a completely different state.  With the new change we are losing that feature, but for me it’s a fair trade off.  It may also be possible for them to implement something like this in the future once they have it all worked out.

So as of right now I’m definitely going to buy an Xbox One because MS showed off some killer games at E3 like TitanFall and Forza 5 .  I just have to wait and see what else Sony has up their sleeves to see if I keep their pre-order as well.  Gamescom, the world’s largest entertainment convention is happening in August, and the Tokyo Game Show is in September.  Perhaps Sony can pull a rabbit out of a hat, like they did at the end of their E3 press conference, and make gamers stand up and cheer.  Both consoles have over four months to go before they launch.  Let’s see how they use their time.